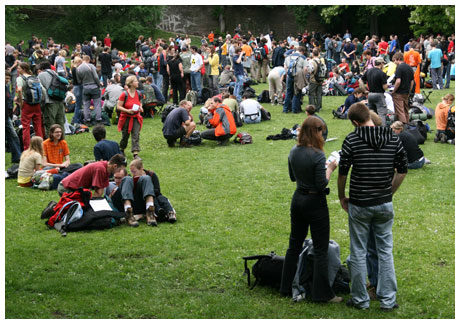 It all started in 2009 when a group of friends connected with the PRINCIP company, in Prague, put together the code-game Bedna. Bedna (“the box”) is an outdoor game for 5-person teams which is based on the idea that each team, after receiving a code at a specific “station,” must solve the code, which in turn reveals the location of the next station. Bedna differs from other code-games, in that players, throughout the entire period of the game, must go along with a physical conundrum which is comprised of the entire game. That year we wanted to come up with something special, something no one could anticipate, something that would be original not only compared with previous years but with all code-games ever.

During the preparation period of the game, we at PRINCIP were playing around with miniature electronic accelerometers and created a system for the classification of movements of patients with various injuries and traumas. Because of our electronics’ experience, it occurred to us to build an electronic brain-teaser-style game in the form of a small white cube (we started calling it “Bednička”-“The Little Cube”). The little cube reacted to movement and was able to signal via beeps and 4 lights. We never thought that we might be building the forerunner to Rubik’s Futuro Cube.

The game took about 24 hours to complete and players had to solve 17 classic codes and 9 problems on cube to reach success.

When we finished creating Bedna we were trying to figure out which direction to go next and it occurred to me to create a version of the Little Cube that was accessible to a larger section of game-players–not only fans of code-games. The original version of the cube, for instance, communicated only in Morse code–obviously, not a game for everybody. 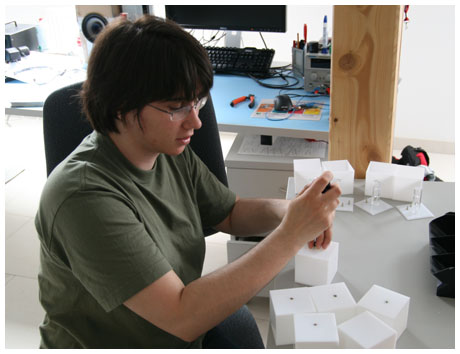 The first results were compelling. The little cube could now speak, play and sing, and the 4 lights became 9 at each side, and colored, at that. It was as if the little cube wanted to be a little lighted Rubik’s cube. But we left the best part about the original—the fact that it didn’t’ have any buttons and was controlled only by movement. In order to operate the game, a *little* exercise was necessary.

We had 4 prototypes and we thought, what next? Kickstarter? A sponsor? In February, 2012, a colleague and I went to New York where we visited the Toy Fair 2012. At this closed conference, we tried to entice some bigger producers to invest. We were lucky to find ThinkGeek, which after further discussions in the following months, decided to invest in a trial run of 1,000 units for the American market. And thus, Futuro Cube was born. 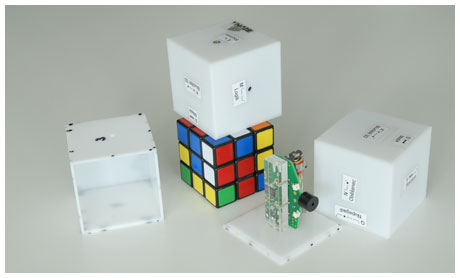 Another firm, Seven Towns-which owns the rights to Rubik’s Cube-also took a great liking to Futuro Cube. After meeting and following discussions, we decided that Futuro Cube will transform into Rubik’s Futuro Cube, which is for us a great honor. We are very proud to join the Rubik’s games’ family.

We hope that you like the Rubik’s Futuro Cube, and we are already looking forward to new games, created by the players themselves, in the development field.