Wireless connection allows two Cubes to communicate at distances of up to 5 meters. Your opponent, therefore, doesn’t always have to be the Cube, itself; you can challenge your friends as well. Multiplayer mode can be activated with games such as Gomoku, Tetris and Multiconnect.

Every one is familiar with keyboards and touch displays, Rubik’s Futuro Cube comes with something completely new. Turning and tapping is the base, full control is comprised of sophisticated gestures. Rubik´s Futuro Cube is a black cube with light diodes, audio cues and vibrations. Each side can display colour points with the effect of light diffusion of various intensities. Play is accented by sound effects and the Cube’s speaking voice.

Rubik’s Futuro Cube is a game console packed with action games and brain-teasers. In fact it attracts users from a broad cross-section of the society. In our wide variety of games, everyone can find their favorite.  Our collection of games and brain-teasers is constantly growing thanks to our firmware updates. When your current games no longer interest you, it’s simple to download new ones or you can even try create your own.

Rubik’s Futuro Cube runs on a rechargeable battery that provides a number of hours of play. To recharge, simply connect to your computer via the standard micro USB cable or a web adapter.

Some of the games are quite difficult logical challenges that require you to study the problem and figure out the algorithms to solve it. Puzzle games are a timeless entertainment that continues to develop—those who like Rubik’s Cube will fall in love with Rubik’s Futuro Cube. Give a try to Gravity Puzzle, we invented this especially for this Cube. The nature of its control and transposition scheme generates puzzle impossible to make in a mechanic way.

Many of our games are very sensitive to controls and require you to be quite dexterous with your motor skills. Some games use a hotspot – the uppermost LED light is brighter – as a cursor. Other games require you to hold the Cube in certain positions – you control the top side for example. Some of these may be a little difficult at first but players improve quickly, and that’s just the beginning… After some practice many people find out that there is no force needed at all and all controls will easily get under your skin.

Many game enthusiasts love the Five-in-a-Row (Gomoku). Playing it on the Cube, however, proves to be more interesting because normaly your spatial imagination is not used to similar tasks. In fact, many Rubik’s Futuro Cube games are based on familiar games; however, when adapted to a cube, they force the player to stretch his spatial memory and imagination. A specialty of the Rubik’s Futuro Cube is a game called Dream Quest. This can be played completely with your eyes closed. Everything happens only in your brain. Try the first level and then improve.

HOW DOES IT WORK?

The Cube is a mix of cutting-edge technology and innovative design.

Although the Cube looks very simple (like a cube), it is packed with new technology and it is able to process data from the sensors. That helps it to react to motion, gravity, tapping, to determine gestures and react using its 3×3 RGB LED light matrix on each side. Thanks to the quality sound processor the Cube is able to play sounds, music and voice. 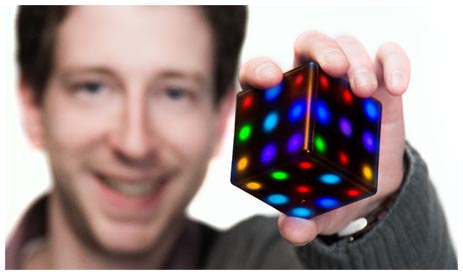 This feature is used for determining the top, side and bottom taps and for selection with gravity cursor. Imagine a straight line starting at the center of the cube directing always towards the sky. The gravity cursor is placed at the spot on the surface of the cube, which is intersected by this line. By rotating the cube, you can easily select any spot you like. 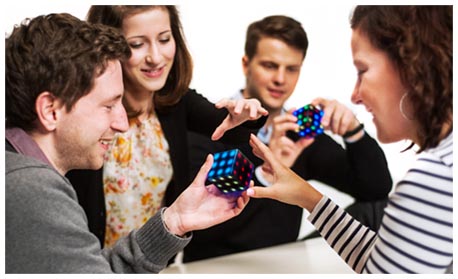 The Cube tracks your motion to recognize patterns that are used as a game input. This feature can also be used in medicine to diagnose motoric disorders. The circular gesture we use as the game menu gesture is also a great example of utilizing the motion tracking. Many parameters like smoothness, speed, precision can be obtained from each recognized pattern. 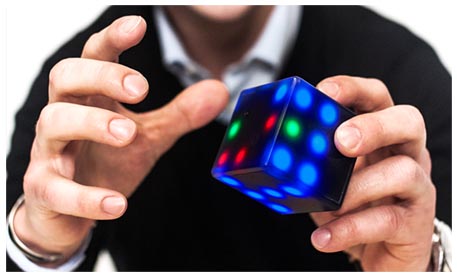 The Cube’s accelerometer can determine when you tap it. It also recognizes what particular side did the user tap and whether this side was on top, bottom or one of the lateral sides. Tap to each individual side can be detected in two ways – absolutely (6 different taps total) or relatively. Relative tapping only discerns three tap types: side (any), top and bottom. 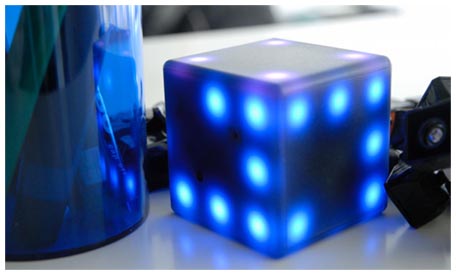 Each side of The Cube contains 3×3 RGB color LED lights matrix, meaning 56 LED lights  in total. Each point varies its intensity and type of light (solid, flashing with different speed), giving us many color options to design games with. 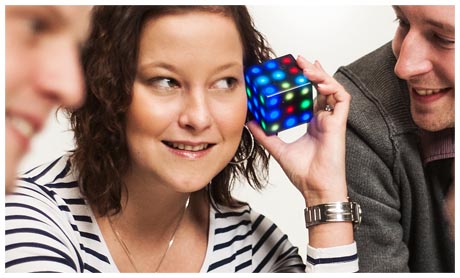 The Cube can play 4 channel sounds and voice overs. And because it would be too hard to let people figure out what the heck is the puzzle about, we added short voice description of a selected game plays as player rotates Rubik´s Futuro Cube in game menu. Any game information like how to play, game feedback or your score can be conveyed this way.